This page is dedicated to Mary Ann Dunkin, a frequent contributor to this site.
Mary Ann Dunkin passed away peacefully on July 28, 2011, after battling Acute Myelogenous Leukemia.
MARY ANN HENDRICKSON DUNKIN, first child of MARION C. HENDRICKSON and GRACE E. GROFF, was born Sunday, 14 July 1929, at the Hendrickson family farm north of Nodaway, Adams Co., Iowa. She was baptized on Mothers' Day, 8 May 1932, with her sister, Deloris Jean, at the Nodaway Methodist Episcopal Church.
While her future husband, USAF PFC Ben Dunkin, was attending radar school in Florida, Mary Ann was enjoying her senior year at Nodaway High School.  She was busy with classes, playing forward on the girls basketball team, was a cheerleader, editor of the school paper, and participated in music and drama.  Mary Ann graduated from Nodaway High School on 11 May 1947.
After graduation she attended Iowa State Teachers Extension College, earning a Limited Elementary Teaching Certificate.  She taught country school in Montgomery and Page Counties, Iowa for two years before she married.  She attended Nodaway Consolidated School Nodaway all 12 years and had never attended a country school. It was different in her new job with all eight grades in one room! Teachers were needed after WWII.  She was not too thrilled to be teaching though, because in her heart of hearts she wanted to go to the University of Iowa and study journalism.
Mary Ann, married on Sunday, 26 June 1949, Nodaway Methodist Church, in a double wedding ceremony with her sister, Deloris, to BENJAMIN LEE DUNKIN, son of FRED B. DUNKIN and ANNA E. LINN.  Mary Ann and Ben and Deloris and Marvin Peterson celebrated their double Golden Wedding Anniversary on 26 June 1999.
Ben served 26 years in the US Air Force on active duty, as Chief Master Sergeant, retiring 10 August 1972, to Fort Collins, having been stationed in Texas, Florida, Alaska, South Dakota, Kentucky, Mississippi, Newfoundland, California, Japan, Vietnam and Michigan.
Their first home was in Rapid City, South Dakota, where Ben was stationed.  Their second home was at Marks AFB, Nome, Alaska, where they celebrated their 1st wedding anniversary.   Their first child, Ronda Lee, was born at Ladd AFB, Alaska.  Their second child, Denese Ann, was born at Fort Campbell, Kentucky.  Their third daughter, Lisa Renee’ was born in Sacramento, California.
Mary Ann found time to serve as a room mother in her daughters’ various classrooms from Newfoundland to California and Japan, and was active in PTA, a Girl Scout Mother and leader, and taught Bible School at the Methodist Church in Nome, Alaska, which included children from the Eskimo Methodist Church, and in various Base Chapel programs. She loved spending her spare time sewing dresses, etc. for her three daughters.  While stationed in Japan, she and Ben were active members with their Square Dance Club and again in Roseville, California, where they were members with the Lad and Lassie Square Dance Club.  She became interested in genealogy in 1979 which turned into a very interesting hobby; she wrote several family history books.
Retiring to Fort Collins, Colorado, Ben was employed with the Poudre R-1 School District for 13 years, and Mary Ann was employed in the business office at LCVTC for 10 years. When fully retired, they enjoyed extensively traveling and visiting with friends and family.
Mary Ann and Ben were members of Christ United Methodist Church and the Adult Sunday School class since arriving in Fort Collins in August 1972. Mary Ann served a term as trustee, and was on the admin board and worship committee.
Mary Ann is survived by her husband of 62 years, Benjamin Lee Dunkin; three daughters, Ronda Rastler (Dan) of San Jose, CA, Denese Van Dyne (Brian Beasley) of Atlanta, GA, Lisa Martin (Scott) of Ft. Collins, CO; two sisters, Deloris Peterson of Villisca, IA, and Janis Davis (Lowell) of Ft. Collins, CO; four grandchildren, Eric Rastler (Jennifer De Rose) of San Jose, CA, Christina Seals (David) of Roseville, CA, Melinda Martin of Ft. Collins, CO, Lucas Martin of Ft. Collins, CO; one great-grandchild, Dylan Seals of Roseville, CA; and many nieces, nephews, and cousins.
We, her family, are grateful to and thankful for the loving care Mary Ann received from the staff at Pathways Hospice; the staff in the Oncology Unit and Infusion Center at Poudre Valley Hospital; and Dr. Miho T. Scott and other staff at the Cancer Center of the Rockies.
Memorial contributiions can be made to Christ United Methodist Church or Pathways Hospice in care of Bohlender Funeral Chapel,121 W. Olive St., Ft. Collins, CO 80524.  Condolences may be sent to the family at bohlenderfuneralchapel.com 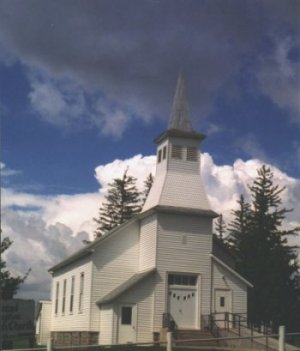 The Strand Lutheran congregation was organized May 21, 1875, with the Rev. Osmund Sheldahl as the first pastor; he preached in the Norwegian language. In 1915, the congregation reorganized to an all English Lutheran Church with special Norwegian services for the elderly - these services were discontinued in 1916.

The first baptism on record was Oscar Severin Omundson on April 27, 1875. The first confirmation class was confirmed in 1884, at the Rockdale school house, by Rev. Christianson. Members of the class were: Johnnie and Annie Johnson, Andrew and Sarah Anderson.

The congregation incorporated under the Iowa State Laws as the First Evangelical Lutheran Church, Adams County, Iowa on June 28, 1886. These articles were signed by Henry G. Hendrickson, Ole Lovig, John Hetland, Tom Nelson, Daniel Odson, Thomas Orstad and Lars Retland. On this same date they bought three acres of land with a house on it from Osmund and Catherine Knutson and in 1897, they bought 17 acres more from the Knutsons. This was in Section 32, Lincoln Township. The Strand Cemetery is directly behind the church.

The church was built in 1886 without vestibule or tower; these were added in 1903, by a donation of $100.00 from Gudmund Hendrickson. The first confirmation class in the new church in 1887 were: Dora Marvick, Bertha Hendrickson, Betsy Larson, John Larson, Thomas Hendrickson, Eugene Knutson and Milton Johnson.

The bell was rung three times each Sunday morning by Levine Kjleen, at 9:00, 9:30 and 10:00 AM calling the parishioners to services. It was tolled for funerals, supposedly the age of the deceased. Levine Kjleen was a faithful janitor and grounds keeper for 35 years, from 1901 until his death in 1936, residing in his small house on the grounds. He was responsible for most of the lovely peonies in the cemetery, transplanting them from one plot to another adding much to the well kept appearance.

Horses and buggies were used for transportation for these pioneer members. Chairs were used for seating until pews were installed in 1914. The men sat on the east side of the church and the ladies and children on the west side. A coal stove was in the middle of the room and a large circle of kerosene lamps hung from the ceiling.

The parsonage, built by Ole Stuvick, was erected in 1916, for the sum of $585.00. The church and parsonage have both been remodeled. The Ladies Aid sponsor a bazaar (the Mission Sale), the fourth Saturday in August each year, sponsor bridal showers, special dinners, lunch farm sales and help with expenses of the church.

Henry G. Hendrickson, a charter member of the church, left by will $1000.00, when he passed away in 1920, to be invested and the interest used to help with expenses of the church.

The church celebrated their centennial in 1975 with an all day celebration.

The present congregation has 121 baptized members.

*Died while pastor at Strand

**Killed in car accident while pastor at Strand.

The Norweigan Settlement in Adams County, Iowa was populated with families who had immigrated from Norway. Most had first settled in the Fox River Area, Mission Township, near Norway in LaSalle County, Illinois. They started migrating further west in the 1860’s. Several of these Strand families had resided near Norway in Benton County, Iowa several years before moving on to Adams County.

It is known that the town of Strand boasted of a post office, blacksmith shop and two stores.

The first store was owned by Ole Lovig on his land in the late 1870’s and operated by his family. In 1892, Andrew Thompson moved from South Dakota and operated the store. In 1889 the Post Office was established in the “Store” with the owner the “Postmaster.” The post office closed in 1909 because of rural free delivery. In 1890, Lars O. Larson and Lou B. Larson operated the “Store.” Lars Larson, the son of Ole Larson Rodmyr - Rodmyr being the farm name in Norway, moved to Adams County in 1875 and settled on a farm northwest of where the Strand Lutheran Church stands today. The Larsons’ operated a “Huskster Wagon” which traveled about the community bringing groceries to the people and picking up produce. The store was a meeting place for the small communuty for visiting and news. For a time the Hans Peterson family operated the Strand store. With the coming of the telephone there was a switchboard in their kitchen and the children carried messages to neighbors without phones. Steiner Knutson operated the blacksmith shop which was located north of the present Strand Lutheran church.

Before the Strand Lutheran Church was organized and the community was first settled, circuit church services of the Methodist faith were held in the Rockdale schoolhouse.

Mormons migrating from Nauvoo, Illinois passed through southern Iowa including Adams County where they stopped for awhile. They may have buried some of their dead in a cemetery southwest of the Rockdale school on land donated by John and Hulda Larson, who had moved to Adams County in the spring of 1872. This was located in Douglas Township, Section 7, one Acre. Hulda died January 30, 1886 and John on January 27, 1888 and both are buried there. It was first called, "Larson Burial Gardens." It has been called "Norway Cemetery" or the" Old South Strand Cemetery" or "Larsons Buryng Ground". Later the name was changed to "Rockdale Cemetery".

Hulda and John Larson are both buried at the "Larson Burial Gardens" now the Rockdale Cemetery. John Larson gave an acre of his farm for this cemetery.

I don't remember where I got that information about the Mormans. As far as I can tell only one "strange" name on this WPA list - #2 - she may be the Morman.

Now I see where I got that information - from the 1984 Adams County History Book - pagae 47 - I don't know who might have written it - no name at the end. I don't know when the Mormans passed thru - but the Larsons did not get there until around 1870. Guess someone would have to do land research to find out if the cemetery was there before John Larson bought the land. Or exactly when/the years the Mormans went from Nauvoo, Illinois to Salt Lake City, Utah. I thought the Morman Trail went up thru Council Bluffs? Maybe some got off track and ended up by Strand.

Mormans migrating from Nauvoo, Illinois passed through Adams County where they stopped for awhile. They buried some of their dead in a cemetery southwest of the Rockdale School on land donated by John and Hulda Larson, who had moved to Adams County from Benton county, Iowa in the spring of 1872. This was located in Douglas township, section 7,one acre. Hulda Larson died January 30, 1886 and John Larson died on January 27, 1888, both were buried there.

The neighborhood was mostly Norwegian, so it was first called Norway Cemetery. Several Larsons were buried there, so some called it the "LARSONS BURIAL GARDENS" or the Larson Burying Ground. It was also called the Old south Cemetery. The name was later changed to Rockdale Cemetery.

IN ORDER OF BURIAL:

THESE STONES WERE LEVELED, REPAIRED AND RESET BY DORIS AND HENRY HEATON IN NOVEMBER OF 1999.